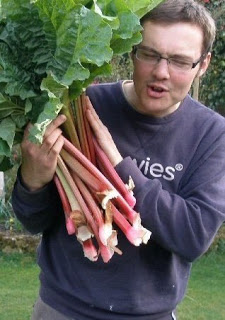 Want to grow your own? Read the article How to Grow Rhubarb. Want to buy some? We sell a variety called Chipman’s Canada Red, hardy in USDA zones 3-8.
Recently, we’ve seen a lot of interest in growing rhubarb. It has to be one of the easiest crops to grow. A happy plant will produce for decades. Grow rhubarb in full sun, in rich, lightly moist soil. In hot regions, plant rhubarb where it will get some protection from hot afternoon sun. Rhubarb will not thrive in soggy soil, where it will be susceptible to root rot, one of the few problems a rhubarb grower can encounter. If your soil is heavy and wet, raised beds are a good option.

For many, the hard part is not growing it, but what to do with the harvest. For ideas, we turned to a gardener from England, where rhubarb is revered. Jonathan Stevens, author of Real Men Sow, a Cheery Allotment Blog, shared this with us:

If I could only grow one fruit or veg, then rhubarb would be a contender. I adore the pinky green sticks. This might be thanks to my mum, who has been dividing and dividing her rhubarb plants for nearly 30 years. I quite literally grew up with her rhubarb patch.

I bounce off the walls for the first harvest, and not just because of the deliciously sweet taste. For me, rhubarb is symbolic of a new season, and really gets my juices going for the coming summer months.

I love snapping a stem in half and sucking up the syrupy scent almost as much as I do eating the ‘barb. But not quite.

Here are my favourite 5 things to make with rhubarb:

1. Rhubarb Crumble Ice Cream: The crumble’s a time-honoured classic, and scrumptious in its own right. Mix it with ice cream, and something truly wonderful happens. I combine Delia’s cheaty recipe with Hugh Fearnley-Whittingstall’s proper ice cream (minus the vanilla). It is immense.

2. Carl Legge’s Rhubarb Cake: I made this after seeing it on Carl’s excellent blog, Llyn Lines. When he posted the recipe, someone commented that it looked so good, they wanted to lick the screen. The vanilla essence, crystallized ginger and rhubarb combine delightfully to produce a genuine indulgence. Particularly good with a large dollop of custard.

3. Stewed Rhubarb on Muesli: The healthy one! My mum was forever stewing rhubarb when I was little, for us to have as ‘afters’ with custard. In an attempt to set myself for the day, I’ve taken to having some stewed fruit and natural yoghurt with muesli for brekkie. Rhubarb is by far my favourite.

4. Rhubarb Jam: I often raid my mum’s prolific patch to knock up some jam. Traditionally, this jam is mixed with ginger, but I don’t like to distract from the distinct rhubarb flavour, so have been leaving the ginger out. Goes great with an Easter hot cross bun.

5. Rhubarb and Custard Trifle: Like crumble, rhubarb and custard is a staple – so much so, there’s even a cartoon named after it. And a boiled sweet. However, add sponge cake, as HFW recommends, and suddenly you’ve got a super simple but tremendously tasty trifle.

There are loads and loads of other great recipes for rhubarb, and year-by-year I’m getting round to trying as many as possible. Anyone got any combos they love? Apparently rhubarb wine packs a punch, and I’ve heard great things about a rhubarb and custard cake.