Take a Closer Look at Crows 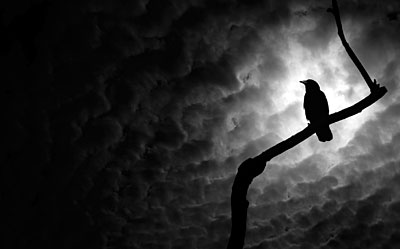 A crow on a barren branch in Death Valley, California.

All spring and summer, our fields and gardens are crowded with busy songbirds flitting in and out of feeders, carrying bits of twig and string to their nests and filling the air with their bright songs. But as autumn brings frosty nights and lengthening shadows, the songbirds depart one by one, and the landscape belongs again to the crows.

I’ve always been fascinated by crows, by their boldness, opportunism and obvious intelligence. But I really don’t know much about them. I know they are members of the family Corvidae, a group that also includes rooks, ravens, jays and magpies. I know there are about 40 species of crows, but the United States is home to only four; the American crow, fish crow, northwestern crow and Tamaulipas crow. That’s about it.

Black Crow silhouettes add a dash of fun to seasonal decor
5-1/2″ stakes secure them in the lawn, garden or straw bale

It turns out I’m not alone in my ignorance. Despite being so common, crows have not been well-studied until recently. One reason is that many species are plain black. It’s not easy to tell one species from another, and it takes a practiced eye to recognize an individual bird. Another difficulty is that crows leave their territories every day. And unlike many territorial birds, they don’t build their nests in the same spot from year to year.  Crows are hard to capture, too. They are notoriously curious, but also wary and quick to alert their cousins of danger. I once had this exchange with a local farmer:

Farmer: I’m gonna see if I can trap those crows.

Me: What kind of trap do you catch them with?

Farmer: Any kind, but it only works once.

In spite of these challenges, a small handful of ornithologists have looked into the secret lives of crows. What they’ve found makes them all the more fascinating.

The Crow Coir Mat is made from 100 percent coconut fiber, and has a rough texture that scrapes mud, snow and other debris from shoes and boots.

Crows are territorial, with one family staking out an area of 20 acres or more. There is usually only one breeding pair, but other individuals will help build the nest, feed sitting hens, and defend the territory. Sometimes there will be several generations of crows in a territory, forming a clan.

In the morning and late afternoon, crows hunt their territory vigorously; at midday they feed more casually with plenty of breaks for socializing. They eat earthworms, seeds, beetles, slugs and bits of carrion, all with equal enthusiasm. They like easily visible seeds, such as corn, a fact that has led farmers to slaughter them ruthlessly. Unlimited crow hunting is legal in practically any agricultural state. That’s too bad, because although crows do eat some seed, they make up for it by eating caterpillars and other pests.

How did crows and ravens become so associated with Halloween? Why is it that we notice them so much more in the fall? The answer lies in their unique behavior.

Kevin McGowan of Cornell University is one ornithologist who has made it his business to study crows. Find out how he tags crows and what he’s learned—the hard way.

Because they are among the most intelligent of birds, crows are associated with wisdom, secret knowledge, magic and trickery. They were once thought to be prophetic omens, and people used to divine the future by watching them. The old rhyme “counting crows” is a holdover from this. Fortune-telling used to be a tradition at harvest festivals, thus the connection with Halloween.

Then of course, there’s the association with death. Most crows will eat some carrion; ravens and the European carrion crow eat a lot. Crows have haunted battlefields and gallows for centuries, sometimes after death, sometimes in seeming anticipation. So it’s no wonder they’ve become a death symbol.  In fact, the word for a flock of crows is a murder. That’s probably just a corruption of a middle-English pronunciation of muster, but it’s not hard to see why it stuck.

Crows don’t migrate, one reason why we notice them more in fall. Another reason is because that’s when they change their roosting behavior. During the summer, each crow clan nests in its own territory overnight, but in late summer this changes. After their afternoon feeding, the clans leave their territories and gather into larger groups, which may or may not be related. These groups converge on a central roost, which may be up to twenty miles away. A single roost can contain hundreds or thousands of crows, all cawing, flapping and fluttering as they settle in for the night. In the morning they return to their territories.

For their roosts, crows choose tall, mature trees but not dense forest—they seem to prefer a commanding view of the area. A large specimen tree in a cemetery is perfect. In cities, I’ve seen them roosting in an abandoned building, lining up along the window-holes and perched on cornices. Either sight is bound to confirm the opinion of crows as one spooky bird.

But the biggest reason we notice crows at this time of year is their distinct kaw-kaw call. During spring and summer, crows have many calls, including clicks, whistles, coos and even a sort of sigh. But as fall approaches they begin to use the kaw almost exclusively. No one knows why; it may have something to do with socializing young birds for the roost.

So that’s how the crows took over Halloween. For me, learning more about these fascinating birds only deepens their mystery. They may not be from the spirit world, but they can still cause a delightful chill on an autumn afternoon.

—Will Workman
Will Workman is a writer, illustrator and teacher. He writes about gardening, travel, art, motorcycling and the outdoors. He lives in Williston, VT.