Organic: It’s Not Just About the Nutrition

You’ve heard about the studies that show organic food might not be that much more nutritious than conventional foods. But, I wonder if that’s the reason people buy organic. If you didn’t hear about it, the conclusion, published in the Annals of Internal Medicine, states: 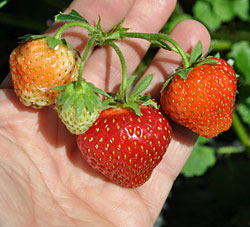 If you pick your own berries, store a bag or two in the freezer for a winter treat.

For me, buying organic is about supporting a more sustainable food system. I choose organic food because I expect these farms produce less runoff, pesticides and, consequently, greater diversity in species — and the types of pollinators that are supported. If I get more vitamins as a result, great!

For me and many people, buying organic is about what’s not in the produce. And the report shows that organic produce had less pesticide residue, though residue on conventional produce was always below the allowable limits. Less pesticide residue seems like a really good thing.

I’d also like to know about taste, something the report didn’t consider. In general, kids don’t like tomatoes — and vegetables in general. Who can blame them when the typical tomato sliced for sandwiches and burgers has the flavor and texture of a sponge. Set a bowl of vine-ripened, Sungold cherry tomatoes in front of a kid and see what happens. If food tastes good, people eat more of it. 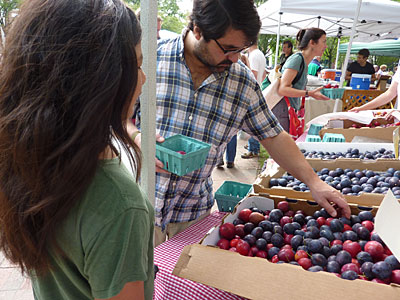 Shoppers at farmer’s markets often have a choice between organic and conventional, but it’s all local.

Yes, these crops often cost more. They can be downright expensive. I am often willing to pay more — up to a point. And if I think it’s too much, I choose something else. Local/organic foods are not always more expensive. For instance, when you freeze what’s available in bulk in season, it’s often cheaper.

Instead of being dogmatic, I try to make well-considered choices. For instance, I might choose conventionally grown green beans from my hometown over organic green beans from the other side of the country. I support local farms and food, even when it’s not labeled organic. If I know the farm and the farmer, I know how they grow, and how they care for the land and everything on it

Organic? Local? Cheapest available? How do you make your food choices?