Watch Out for Ticks 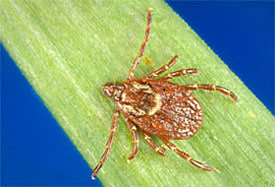 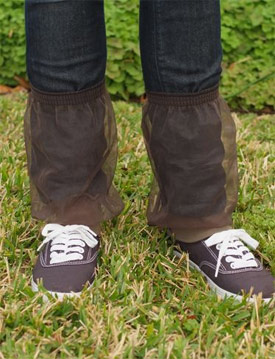 Bug Ankle Guards have fine, hexagonal mesh that excludes ticks and all but the tiniest insects.

In addition to their disease-transmitting capacity, ticks are just plain creepy. These bloodsuckers attach themselves leechlike to your skin while they gorge on your blood. Unfortunately, ticks are also very common, as any dog owner will tell you. Ticks aren’t insects but rather arachnids, more akin to spiders than mosquitoes.

The familiar dog tick doesn’t transmit Lyme disease, though it can be a vector for the bacteria causing Rocky Mountain spotted fever. First identified in the western U.S. (where it’s also transmitted by wood ticks), this bacterial disease occurs more often in central and southeastern states. Initial symptoms are usually headache and fever, with a spotty rash appearing a few days later. About 2,500 cases of Rocky Mountain spotted fever are reported each year; although it can make you feel very sick and complications can occur if left untreated, fewer than one in 200 cases are fatal.

In contrast, almost 30,000 cases of Lyme disease were reported in 2010. Lyme disease is caused by a bacterium and is transmitted to humans by the bite of infected blacklegged ticks, sometimes called deer ticks. These ticks are tiny (between the size of a poppy seed and the size of a sesame seed, depending on the stage of growth) and much smaller than the more common dog tick. Lyme disease can cause a variety of symptoms, including a bull’s-eye shaped rash, fatigue, chills, fever, headache, and muscle and joint aches and swollen lymph nodes. It can usually be treated with antibiotics if caught soon enough.

How can you protect yourself against ticks? Start by avoiding known tick-infested areas — wooded, shrubby or overgrown areas. Understand their habits: Ticks make their way onto the edges of leaves and branches, then wait to hitch a ride on a passing host, so avoid brushing against vegetation. Deer ticks need moist environments to survive, so you’re less likely to encounter them in dry, sunny areas. When hiking, stay to the middle of the path. Tuck your pant legs into your socks so that ticks cannot reach your skin. Keep lawns mowed, and remove debris and brush piles.

Perform full-body tick checks after spending time outdoors. If you find an attached tick, remove it by using fine tweezers to grasp the tick close to the skin surface and pulling upward, taking care not to crush the tick. Disinfect the bite with rubbing alcohol. Inspect dogs and cats daily, too. Although they can get Lyme disease, there’s no evidence that dogs and cats can spread the disease to their owners, although they can bring infected ticks into your home or yard.

For more information, read the article Protect Yourself from Summer Insect Pests.