A Banana Grows in Burlington 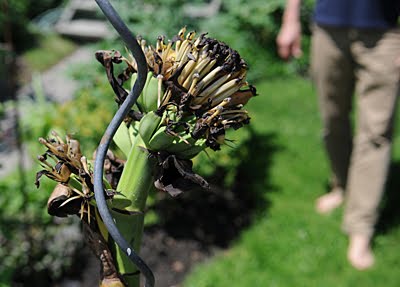 The staked stem of our Himalayan banana tree, growing in Burlington, VT.

For many years, we have grown banana trees in our garden. Not for the fruit, but for the large, tropical leaves and the unlikely accent they add to our Vermont gardens.

In fall, I dig up the plants and drag the heavy clumps — wrapped in burlap — into the basement for winter dormancy. The unheated basement remains at about 40 to 50 degrees F., which seems to suit the bananas just fine. In spring, the plants get dragged back into the garden and planted, once there’s no danger of frost. It takes about a month before they start growing again, but they look nice by midsummer and fabulous by the end of August.

The trees we grow are not typical fruiting bananas, which need more than a year of continuous warm weather to produce fruit. We have three types: Japanese fiber bananas (Musa basjoo) a Himalayan or Sikkim banana (Musa sikkimensis) and an Abyssinian banana (Ensete maurelii).

Last fall, I noticed that the Sikkim banana was about to flower. What a shame to bring it into the basement just before such a dramatic event, but there was no other option. And so it lay there on the hard concrete floor of our basement from October to May.

We brought the bananas out as usual this spring. They look kind of silly in the garden because it looks like we’ve planted tree stumps. But after a few weeks, tightly rolled green leaves start pushing out through the brown stump, unfurling gracefully as the summer begins. The Sikkim banana didn’t push a leaf, but I notced a bulge at the end of the stem. When I peeled back some of the stem, I saw an odd-looking cluster, about the size of a softball. Upon closer inspection, I could see tiny shapes (kidney bean-sized) that looked a lot like tiny, green bananas.

A week later, the shapes have continued to grow — and they sure do look like bananas.

We are eager to see what happens. The tree got planted in our front garden, so we pass it every day on the way out of the house.

If the fruit matures, it will be our little horticultural miracle. We probably won’t eat it, though. According to Plant Delights, a nursery that sells all the varieties I’ve mentioned, the fruit is not edible: “To say these bananas are edible is about like saying that Himalayan bathrooms are comfortable … both have an aroma, but that’s about it.” 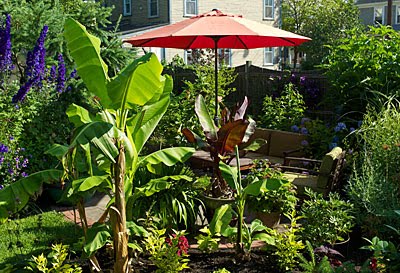 How the trees look in mid-June.