When to Prune Raspberries

Berries are the essence of summer, and for the past few weeks I’ve been immersed in berrydom. Earliglo strawberries seem long gone; in their wake came black currants, red currants, gooseberries, blueberries, and raspberries. In summer, these berries demand nothing more than picking but — for the raspberries, at least — some pruning sets the stage for bountiful berries again next year. 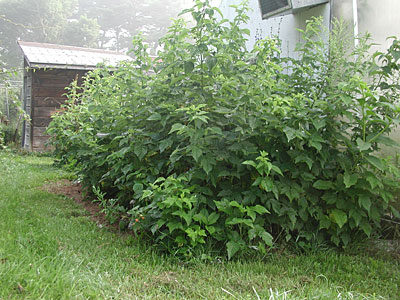 A row of unpruned Fallgold raspberries. See a photo of the pruned row at the end of this post.

Each raspberry cane is biennial, dying at the end of its second year. I grow both types of raspberries:

When the midsummer raspberry crop ends, I cut out the canes that bore fruit — right to the ground. This is the end of their second year, so they are beginning to decline anyway. 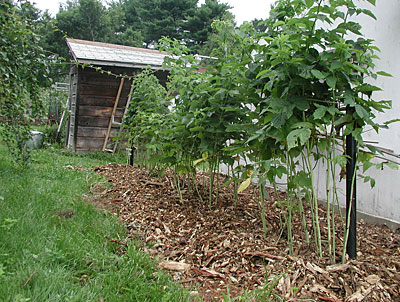 A row of Fallgold raspberries, after the canes that fruited have been pruned out.

Cutting out these canes makes room for the young canes that will bear raspberries later in the summer or next year, depending on the type — everbearing or summer-bearing. This pruning technique also ensures that each cane will bask in abundant sunlight and get good air circulation, which limits the potential for fungus problems.

While I have my pruning shears in hand, I also cut down any errant young canes. I grow raspberries in a row that I let grow no wider than about a foot, rather than a raspberry “patch.” By keeping relatively narrow rows, I know that each cane will bask in sunlight and breezes.

I don’t have to do any of this pruning now. I could do it anytime until early next spring. But why wait? It’s quick, it’s easy, it reduces the potential for disease, and it leaves the raspberry patch looking neat.

About the writer: Lee Reich, PhD., is author of The Pruning Book. He worked in agricultural research for Cornell University and the U.S. Department of Agriculture before moving on to writing and consulting. He grows a variety of fruits and vegetables on his farmden (more than a garden, less that a farm), including many uncommon fruits, such as pawpaw, hardy kiwifruit, shipova and medlar.

Follow this season’s progress of berries, other fruits, and vegetables in his blog, In Lee’s Garden Now.