Why I Grow Food

April 18, 2011Written by Gardener's Supply
Leave a Comment
As I’ve grown older, I’ve come to realize that the choices that I make on a daily basis affect the world beyond me. They affect people that are close to me, people that are thousands of miles away and they also affect the environment. 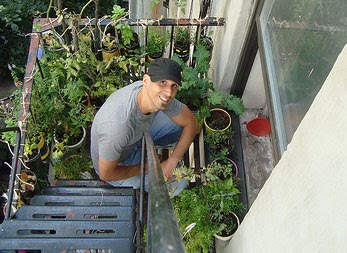 Mike Lieberman in his first garden, on a fire escape in New York City. Learn more about Mike in his blog, Urban Organic Gardener.

It’s often inspiring to hear how people start in gardening. Today we’d like to share a story from Mike Lieberman, a guy who grows a lot of his own food on a Los Angeles balcony.

As I’ve grown older, I’ve come to realize that the choices that I make on a daily basis affect the world beyond me. They affect people that are close to me, people that are thousands of miles away and they also affect the environment.

We live in the information age, so there is a lot of information out there concerning our impact on the environment. It’s great that this is widely available, but it can also be overwhelming.

What can an individual do?

Where does one start?

These are the thoughts that went through my head and made me start to feel helpless. I thought that there was nothing that I could really do.

Instead of just sitting back, I decided that I wanted to do something. I wanted to do anything, so I began to think about another passion of mine, food.

Back in 2006, I got more interested in food and how it affects our health. I’m talking about real food and not the processed garbage that’s become identified and accepted as food these days.

There’s a lot involved in getting food to our plates. Here are some things to consider:

One of Mike’s clever plant markers.

These are just a few of the reasons I started to grow my own organic produce.

I’ve been apartment vegetable gardening since 2009, when I grew vegetables on my fire escape garden in NYC. I had zero experience and read about a half of a book on gardening. Let’s be honest — most gardening books are mad boring. It’s not an exciting subject.

In April of 2010, I moved to LA where I started a balcony garden and have continued to grow even more food. My 13×4 balcony seems like a farm compared to the 2×3 fire escape I was working from.

I use trial and error. It’s a pretty simple way to figure this gardening stuff out. Think about it: What did people do hundreds and thousands of years ago? They certainly didn’t go Google “how to plant seeds.” They just did it, which is what I’m still doing.

I am not a gardener though, and I’ll argue that. I might have a vegetable garden, but I grow food.