Sometimes, our customers really “get” a product and take it in a new direction. Susan Pav, a gardener from Pennsylvania, took our Garden Quilt and used it to create mini-hoop houses so she could grow crops in the winter. She took photos of the set-up and tells how she did it: 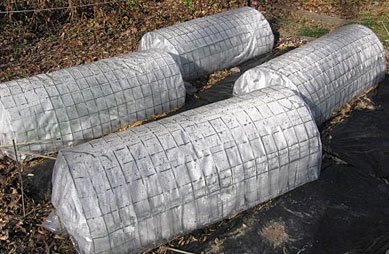 A set of four tunnels in my garden.

Lifting the tunnel to check the plants. 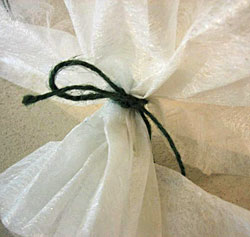 The tied-off end of the tunnel. 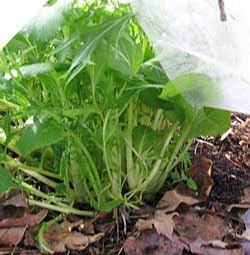 Sometimes, our customers really “get” a product and take it in a new direction. Susan Pav, a gardener from Pennsylvania, took our Garden Quilt and used it to create mini-hoop houses so she could grow crops in the winter. She took photos of the set-up and tells how she did it:

Some of my inspiration to try harder at season extending came from The Winter Harvest Handbook by Eliot Coleman. I thought that if his large farmer’s market hoop houses were so productive during the Maine winters, I could experiment with his techniques in a garden a few USDA zones south of Maine. In addition, his book includes a guide to the best crops for succession planting and overwintering experimentation.

I created my first set of hoop houses, or tunnels, in September of 2009, using a wire cutter to cut segments from a roll of coated wire fencing (about 2×2.5″ mesh). The 36″-high roll provides a partially formed hoop shape and can be cut into segments customized for the height you want.

For my low-growing crop of greens, I use a two-hoop design — essentially a tunnel within a tunnel. The inner tunnel is made with a 28-30″ segment of fencing; the outer tunnel with a 34-36″ segment. Plants in the inner tunnel have about 8-10″ of headroom.

Why two tunnels? The gap between acts as an insulation layer, which can be supplemented with a layer of clear bubble-wrap if you grow especially tender greens or have severe winters.

The inner tunnel is covered with garden fabric and the outer tunnel is covered with clear 2-3 mil plastic. I cut the coverings to fit the wire fencing, leaving some excess at each end and sides. I attach the sides to the fencing with staples. To close off each end of the tunnel, I gather the excess and tie it at ground level, leaving a “handle” that can be anchored with an Earth Staple.

When I first tried this technique, I used seed that I had on hand, selecting somewhat cold-friendly crops: spinach (Monnopa, Reddy, Baby’s Leaf, Emu), broccoli raab, bok choy, Swiss chard, beets (for their tops) and even some tiny garlic bulbils for garlic greens.

After sowing the seed, I water and cover the inner tunnel with the garden fabric. Garden Quilt and All-Purpose Garden Fabric all work well. Plants growing in the inner tunnel are well protected until the temperatures start dipping into the lower 30s at night. Then I place the clear plastic on the outer tunnel, remembering to check soil moisture periodically because the plastic won’t let water through.

Initially, I thought about using traditional support hoops for the fabric, but I knew they wouldn’t support the weight of a decent winter snowfall. In addition, it would be hard to get at the crops because you’d have to disassemble the covering. With my modular framework, you can attach each tunnel to the ground with a single Earth Staple at each end. I can access the underlying planting bed by removing the Earth Staple from either end and lifting the hoop up. If the ground is frozen solid, it can be difficult to pull the staple on the outer tunnel.

When there are feet of snow covering the tunnels, I leave the crops, insulated by the snowy blanket. My tunnels have stood up to over 2 feet of snow without damage. If high winds are imminent, I supplement the outer tunnel with additional Earth Staples along the sides. Sometimes I just anchor the tunnel with a temporary weight, such as a large branch.

At the end of each season, the hoops can be rinsed, untied, nested and stored, or re-used for the next garden cycle, replacing the garden fabric or plastic as needed. My tunnels have lasted for two winters so far — with the exception of one that was damaged by a curious squirrel.

This year, I have started using the same tunnels for hardening off flats of vegetable seedlings, rooted cuttings and windowbox baby greens. So far, so good! 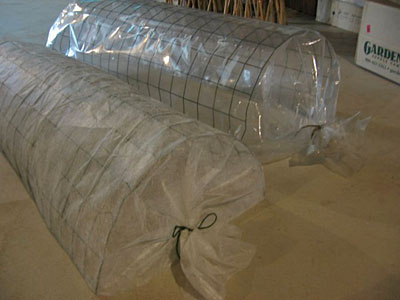 The inner tunnel, left, and the outer tunnel.