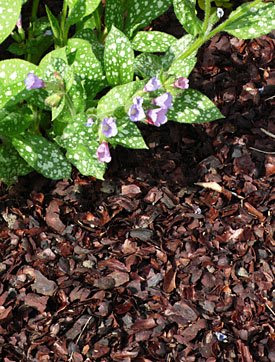 After spreading cocoa mulch, I like to water the area so the tiny hulls will knit together and are less likely to blow around.

I used to disdain people who spread mulch on their flower beds and shrub borders. I thought, “Are they too lazy to weed?” My own flowerbeds were always mulch-free. I did have to spend a lot of time weeding though, especially during May and June.

However, after many years of landscaping for clients throughout northern Vermont, I’ve come to see the benefits of mulch. Yes, it does help prevent weeds, but it’s not 100 percent effective. You still have to watch for weeds. To me, the main benefit of mulch—as long as it’s not spread too thick—is to help the soil retain moisture during dry periods. This is especially clear when you tend gardens for clients who are infrequent weeders.

A couple years ago, I became a convert to cocoa mulch. It can be expensive but I think it’s worth the price. The mulch of choice around here is shredded hemlock bark. It’s readily available, but getting expensive too: a cubic yard sells for $50 or more. So, even if you only use it in a small area, give cocoa a try. 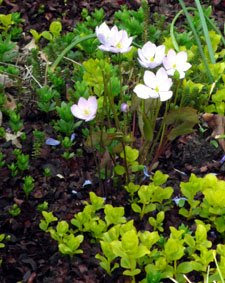 This garden is filled with small, delicate treasures, such as this hepatica. Because of its fine texture, the cocoa mulch doesn’t smother the delicate perennials.

I still use shredded hemlock around trees and shrubs, which are fine with the more coarse material. However, I always look for a double-ground product, which is finer. And, if I’m lucky, I can find some of the partially composted stuff, which is even better. It breaks down more readily and doesn’t form an impenetrable, water-shedding crust.

For more on mulching, read Mind Your Mulch; for related products, see our Mulch department.

Vegetable Gardeningcompost and mulch, in the garden