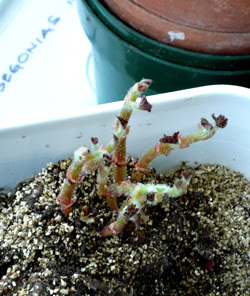 After pulling the begonia tubers in late October, I let them dry for several weeks. Then, I nestled them in moist vermiculite in a plastic bucket. When I checked in on the tubers in February, they’d already sprouted — even though the bucket had a lid on it!

Mrs. B. called me late in October. The frost was coming and it would be the end of her begonias for sure. She was recovering from a fall and couldn’t get to the garden, so I drove to her cottage during lunch and quickly uprooted the tubersas big as potatoes. I’d never seen such big begonia tubers.

Last summer, Mrs. B. hired me to care for her garden because her husband could no longer garden. She was celebrating 90 years, so she needed a little help around the yard. For years, her husband had tended the magnificent garden that surrounded their cottage. The place overflowed with color from clusters of fiery salvias, rows of wax begonias and a row of three mature clematis vines that covered the gable end of the cottage.

The star of the show was a row of tuberous begonias, so big and healthy that they formed a low hedge beside the front door. Mrs. B’s husband saved these every fall and started them anew in the spring. The huge, petal-packed blooms grew 4-6″ across and were always enjoyed by everyone in the neighborhood.

Mrs. B. called me in November to check on the tubers. Had I gotten them out? She was glad to know I’d pulled them up in time. She also wanted to tell me that she would be moving out of her cottage and into an assisted living facility. And, she wanted me to have the tubers. I was honored.

The tubers were huge when they came out of the ground. At planting time, they’d hardly shriveled at all.

When I packed the tubers in December, I worried that I would lose them to rot or decay. I worried that the legacy would end with me. But I checked them the other day, and one of the tubers had already sprouteda cluster of stocky, 4″ stems with tiny leaves. So, I drove to the garden center in a near-whiteout snowstorm to get some potting soil.

The tubers were as big as potatoes, but more flat. I recycled some 8″ mum pots, which accommodated the tubers nicely. With some sunshine, they’re sure to take off. By June, I should have some beautiful plants. And the legacy will continue, from one garden to another.