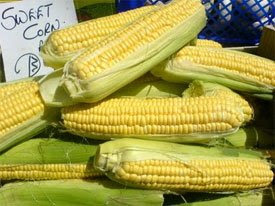 Several dairy farms in town become sweet corn entrepreneurs for five or six weeks in late summer. Canopy-covered picnic tables on the front lawn of their farmhouse serves as a roadside stand for a couple of the farmers. The fanciest corn stand is a permanent, but backless structure with a wood-plank counter at the curve of a horseshoe driveway. Plywood signs featuring folk art paintings of husked corn announce the start of the eagerly awaited season. The farmers’ kids harvest the corn each morning, stacking it like cord wood on the tables for the evening commuters.

Although corn-on-the-cob is available nearly all year round in some supermarkets, the starchy flavor and chewy texture of that shipped-from-afar vegetable barely resemble the sweet, tender, buttery kernels of freshly picked corn. Within 24 hours of picking, most corn varieties have transformed at least half of their sugar to starch. Even the new super-sweet varieties eventually succumb to the natural process. The only way to attain perfectly succulent corn is to cook the ears the same day, and, some say, the same hour, as they are picked.

I prefer to steam husked corn-on-the-cob for about 10 minutes over boiling water in a large covered pot. My family usually eats only four ears of the dozen I pick up on the way home from work. That leaves eight ears for the freezer. I buy these extra cobs throughout the season to space out the work and make freezing corn fast and easy.

Preparing corn for freezing only requires a sharp knife, a cutting board, and freezer bags. I hold the cooked ears vertically on the cutting board and slice off two to three rows of kernels at a time. Eight ears yields about 4 cups, which fits perfectly into a quart-sized freezer bag. For 10 minutes work I’ve got enough sweet, juicy corn for another two meals or a creamy pot of corn chowder in the dead of winter.

Some savvy customers pay a bargain price to fill their freezers by signing up for the leftover ears that farmers don’t sell by the end of the day. That’s a great way to stock up if you’ve got a free evening or two at the peak of the corn season.

For more on growing, harvesting, and storing corn visit the National Gardening Association. For recipes, try What’s Cooking America, Do It Yourself, and Cooks.com.